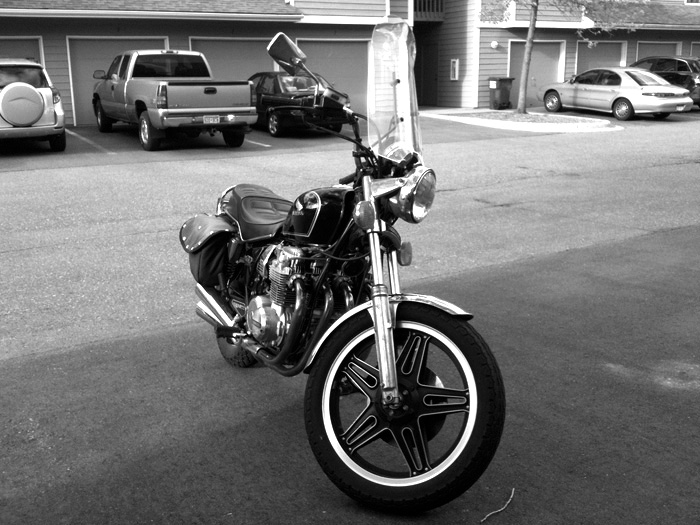 May 1, 2010 — “You wanna go for a ride?” the Mrs asked. We’d just arrived home a few minutes before. She in my MINI, and me on our latest acquisition, a 1980 Honda CB650. I’d snapped a few photos and had mostly recovered from the mild trial of the ride home. I had to think about it for a second. Do I give it a rest and let the whole thing soak in a little bit, or do I hop right back on and see if I couldn’t find my peg feet?

“Yeah, let’s do it!” I hoofed Hanzo backwards and fired him back up. The Mrs started up her own steed and we were off for a cruise. The first question was where do we ride? I know my favorite scooter routes really well, but there’s so much more road out there now. I wanted something fluid, but not crowded. We opted for Pilot Knob Rd. headed south out of Eagan toward Farmington and Apple Valley. My clutch work was still terrible, but I managed to get going without stalling out. The Mrs followed along staggered behind me in the inside part of the lane. This is our normal formation. I envied the low-end torque of her twin — makes it much easier to clutch out in 1st gear.

Finally making the turn onto Pilot Knob, I opened up the throttle and let the flood of horsepower pour out the tailpipes past 6000 rps. The cam chain started rattling and I shifted up into 3rd, twisting hard on the throttle again on my way up to around 50 mph. I finally settled in 5th and the windy cruise of Pilot Knob began. Checking my ill-adjusted rearview mirror, I saw The Mrs was a little ways behind me. This thing has some balls on it. Once we make our way out of Eagan proper (what there is of it, anyway), there’s this great swooping downhill right, uphill left curve set. I wanted to feel the bike out a little better, so I squeezed down on the throttle, tucked down against the tank, and pulled the bike down into a deeper lean for the turns.

I started giggling. Seriously. It was uncontrollable.

I was cackling like a crazy person inside my helmet. I get it now. This is why people ride motorcycles. This feeling of power and stability is why motorcycles embody so much passion for so many people. I get it now. The stress of just 15 minutes ago was gone. The bike and I were one now. I’d get better at the clutch in 1st. That didn’t matter now. All that mattered now was me and the machine — the growl of the exhaust — the stick of the rubber — the howling pull of 4th gear up a hill doing 60 mph. I get it now. I wanted to find everyone who’d ever told me that motorcycles were something to be feared and punch them in the face.

I have petrol in my blood now. The exhaust note of my Honda’s four exhaust pipes has left a rasp in my voice. I have motor oil in my joints. In the days that followed, I could think of little else but the next opportunity for me to hop aboard my japanese road warrior and tempt the fates of easy speed and unforgiving physics. That’d have to wait, though. While the weather cleared, it’s time to change out the handlebars. I get it now. That, or it’s got me.