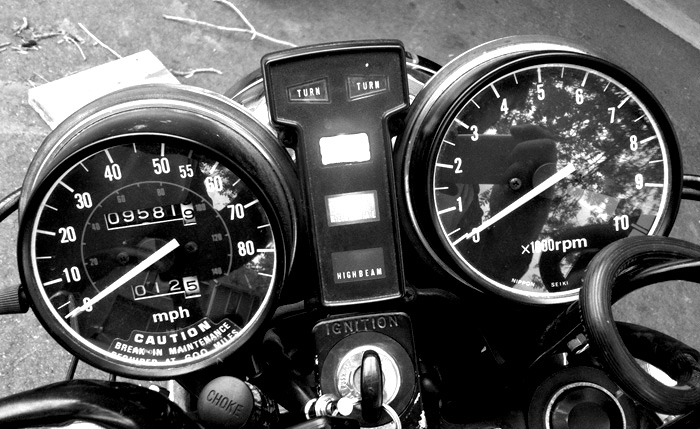 May 5, 2010 — In ancient greek mythology there is a story of a king called Sisyphus. This precocious fellow garnered the wrath of the gods through hubris and treachery. His now famous punishment was to roll a boulder up a hill, only to see it then roll back down over and over again. This, for all eternity. Today the gods of motorcycling decided to punish me with my own sisyphean challenge, except that my boulder was a 30 year-old, 485 lb motorcycle.

I didn’t buy this Honda CB650 with intentions of commuting to work on it. That’s what scooters are for. However, today found me riding the big bike downtown. My mechanical knowledge of motorcycles is still squarely in the newbie camp, so I needed to get this motorcycle evaluated by a proper mechanic. Hand me a car service manual and the right tools and I can fix damn near anything. Motorcycles won’t be that different, but I’m still getting up to speed on all the bits and bobs. So it was my intention today to take the bike by Bluecat Motors and let one of their expert wrenches take a look at it. Mostly, I wanted to make sure I wasn’t riding around on something super dodgy and unsafe. I also wanted to make sure I hadn’t paid too much for it.

The parkway route I take into downtown Minneapolis is very manageable on a motorcycle, even for a neophyte such as myself. The right hand turns at stop signs in the mill and warehouse districts gave me lots of good opportunities to get better at my low-speed clutch work. I still suck at it, but I’m getting better. But for all my progress, I pulled into the parking garage still feeling pretty awkward with the whole enterprise. Though I rarely feel this way in the moment, I’m really enjoying the challenge of basically learning to ride all over again. With balance and situational awareness well in hand, it’s down to getting to know the bike and its idiosyncrasies. That, and the clutch in 1st gear.

The work day came and went and with the spring wind gusting 30+ mph outside. I donned my jacket, helmet, and gloves ready to ride away on my iron horse. Choke on. Fuel on. Key on. Kill switch to on. I hit the start button and the bike kicked over somewhat reluctantly. I’m told these old air-cooled Hondas are a bit cold-blooded, but mostly by people trying to sell me one. That wasn’t the issue here, though. The starter wasn’t sounding particularly enthusiastic. The bike did start, though, so I let it sit for a moment to warm up. Time to go. Clutching into 1st gear, I accidentally stalled it. Not a big shock. No big deal, I thought, I’ll just restart. No such luck. Apparently I was out of battery.

One of the few things “wrong” with this motorcycle when we bought was the battery. The seller said he had to keep a battery tender on it, but that it “should last you through the summer, but it’s on its way out.” Well whether or not it would last me the summer, it wasn’t lasting me the work day. Dammit. I’d even put the battery on the tender last night. The starter wheezed anemically four or five turns of the engine before it finally refused to turn over at all. The headlight went dark. My dash lights got dim. Hmmm…

Not only did I still want to get over to Bluecat before they closed, but it’d be at least an hour before The Mrs could rescue me if I couldn’t get running on my own. I thought about a jump, but I didn’t have cables and then further realized that I didn’t even have the right wrench to remove the seat and even get to the battery. Shit. Way to plan ahead, Salzman. I figured my only hope was to bump start it — to get the bike rolling, put it in gear, and then feather the clutch to turn over the motor. If I only had a hill. I then looked over my shoulder and realized that the parking garage was exactly that. How convenient?

I flicked up the side stand, grabbed the handlebars and started pushing the bike up one level in the garage. Geez this thing is heavy! It was embarrassing and humbling to find that the only thing worse than my current art of motorcycle maintenance is the pitiful state of my cardiovascular endurance. After only 15 yards up a semi-gentle slope, pushing a mid-size motorcycle, I was huffing and puffing like I’d just fled a werewolf on a pogo stick. Turning back downhill, I dropped into 1st gear and twisted the key into the “on” position. Clutch in. Pushing off, the bike picked up a little speed and I pulled my feet up. I feathered the clutch, but too soon. The bike lurched, fired two or three times, then belched to a stop. I’d gone about half way down the slope between levels of the garage. You’ll have to pull the clutch back in once it’s running, dumb ass.

I try again, headed straight for the garage exit and its yellow drop arm. The bike burbled and sputtered and backfired. Still couldn’t quite get it to catch. Back up the hill. I figured out quickly that even with the clutch in, I needed to be in neutral or the bike was even harder to push. Man I hope this works this time. Back down I went, waiting until the last second to feather the clutch with the most momentum I could build up. The bike finally fired up all the way. I pulled the clutch in and gave it some throttle, but the bike died anyway. I quickly figured out that I was in that awkward part of the bike’s warmup process where it’s not warm enough to idle off choke, but too warm to idle right on choke. I placed my helmet and jacket on the wall by the entrance and steeled myself against the weight of my obstacle. There was nothing for it, I had to keep trying. I wasn’t going to just wait around for help. I’m a motorcycle rider now, dammit!

Instead of going back up the same slope again. I turned the corner and headed down the slope to the next level below in the garage. This time the bike got running outright. I pulled the clutch and jammed on the throttle in a desperate attempt to get some rpms on the motor, build some heat, and get it to where the damn thing would idle. The bike snarled and backfired up around 5,000 rpms. I kept revving until I finally got brave enough to try to idle the bike, get turned around and head back up to where I started.

It didn’t quite work out that way.

The bike died straight away. What followed was about half an hour of exhausting, maddening penance to the motorcycle gods. I shoved my boulder up that spiral of hills over and over again, only to have it roll back down, run for a moment, then sputter out. Every few tries, the bike’s charging system would put just enough juice back in the battery for one good start attempt. Those were small victories that kept me going. Eventually, the bike got warmer and a little more willing to run. Then my exhausted, neophyte motorcycle skills would bite me right on the ass. Twice I got the bike started at the very bottom of the garage, rode it successfully back up to the entrance, then spaced out and didn’t pull the clutch back in when I stopped to collect my helmet and jacket.

My arms and legs got more and more tired. My expletives got louder and louder. At one point, I lamented not having my pipe Zippo on me so that I could just open the tank, light the son-of-a-bitch on fire and walk away. Finally, after about 45 minutes of toil, I managed to get the bike back up to the entrance, and even idling semi-happily. I re-donned my rider gear and headed home. I was genuinely worried that I was going to be too fatigued to ride safely. Bluecat was going to have to wait. I’m going home.

I headed back up the parkway toward Eagan. I was thoroughly parched, but the moving air over my sweaty self felt great. More than that, I felt great for having overcome my boulder’s burden, even if I was exhausted. I felt like I’d tamed the horse I was now riding. I felt defiant toward the challenge of riding and maintaining a motorcycle. I can do this. The motorcycle then gave something back to me on that ride home. I’d somehow earned its respect. What the CB650 gave me was a taste of what riding a motorcycle was really all about.

As I entered the cloverleaf on-ramp onto Highway 55, I had an SUV trying to drive up my tail. Alright jackass, follow this. Once I’d apexed the curve, I cranked the throttle. The bike rocketed up through 3rd, 4th, and 5th gear and left me hunting for a 6th gear that isn’t there. I glanced at the speedometer and it said 75. I checked my rearview mirror and Mr. Tailgate had barely exited the ramp a good four seconds or so behind me. In return for my shlepping it up a hundred concrete hills, the Honda had obliged me with a small taste of just what it was capable of. Thanks buddy, you rock.