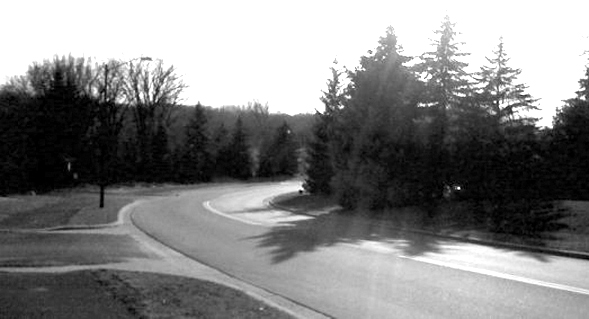 4/16/2009 — The weather today was simply gorgeous, so I geared up, put in my ear plugs, and decided to get lost in the west metro. Unfortunately, not far up the road my infamous wobble returned and remained for the duration of the ride. It came and went here and there, but was pretty consistent. On the upside, I felt a lot better on the bike in terms of leaning and cornering. I think I finally got my feel back. I loved that. What I didn’t love was the moment on the way home when some lady in a white Oldsmobile pulled a classic left turn right in front of me. I anticipated it, thankfully, and was able to shoot the gap between the rear of her car and the double yellow lines. The worst part is that when I laid on the horn, she came to a complete stop perpendicular in the middle of the lane. I was so pissed. I looked back once I was good and clear of the situation, and she was still just sitting there in the middle of the road with her head up her ass. My instinct was to whip the bike around, ride back up and totally freak out on her. Thankfully, my better judgement prevailed and I didn’t pull a Dennis Leary on her.

I later met up with The Mrs to be her wingman on her way home from her first day’s commute of the season. I also wanted to see if my wobble would mysteriously disappear like it did yesterday. Since the route to her office is pretty slow, I left my ear plugs out. I also wanted to see if perhaps the wobble was only something I could detect with earplugs in. My results were mixed. For 90% of the ride, the wobble was nowhere to be found. In a few places, the wobble returned, but only on that stretch of road. Otherwise, I’m blaming the ear plugs. I couldn’t help but think that I was “hearing” the combustion cycle of the engine or something. Now I think that it’s 80% something I can only perceive with my earplugs in and 20% some sort of front or rear tire issue. I’ve read on MV that the GT series Vespas can develop a wobble at certain speeds depending on the wear of your tires. The mystery continues.

High points
Zipping up hwy 7 cool as a cucumber and getting pleasantly lost ’round the Lake Minnetonka area.

Low points
Almost getting wiped out by some $%#& with less brains than eyeballs, and the dark moment of the scooter soul that followed. It hasn’t really scared me, it just makes me mad. I’m not going to quit riding any time soon, but I do feel very vindicated with my approach to riding. S.E.E. all the way baby! This was my first really close call, but thankfully proactive riding technique meant that I was able to react and find a safe escape route.