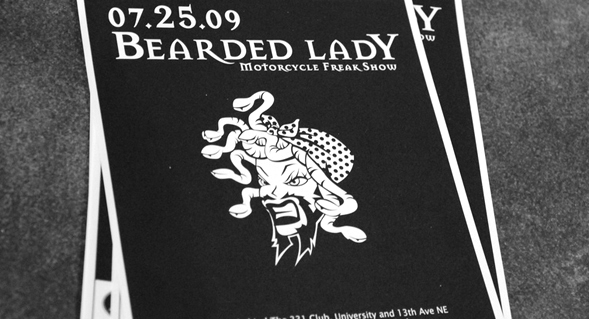 July 25, 2009 — The motorcycle and scooter community here in the Twin Cities is just fabulous. Each season there are a handful of events that I really look forward to. One of these is the Bearded Lady Motorcycle Freak Show. This two-wheeled carnival, complete with cigarette girls and every gritty detail of semi-gothic burlesque aesthetic, is a run-what-you-brung show including everything from custom choppers and cafe racers to streetfighters and even scooters. The show is outwardly friendly to scooters, which is pretty rare for motorcycle shows. This is because the organizers are the least snobby kind of gear heads I’ve yet to come across. If it’s got two wheels and some kind of motor on it, then they’re into it.

Weather forecast for today was for partly cloudy skies and a 20% chance of rain. Things looked fine as The Mrs and I headed for the show, but about three quarters of the way there, the skies opened up on us and we got pretty wet pretty fast. Thankfully, the skies cleared up once we arrived at the venue, the 331 Club in Minneapolis. We ran into some of the local scooterati, toured the gallery, and walked through row after row of bikes. Compared to last year, it seemed like about the same number of rides, but with a much greater variety. However, I think that last year the show had a lot more energy. Maybe it was the rain, or maybe I just didn’t stick around long enough, but whatever it was something was lacking. Still a great time though. What was really fun — now that I have a season of riding under my belt and a year of lusting after one bike and another — was actually knowing what most of the bikes were, or at least what they used to be. The crux of the show is mostly homebuilt custom bikes. Very few were highly polished, high dollar bikes. Most were garage builds and that’s really inspiring. Makes it pretty tempting to knock together something like a Kikker Hardknock over the winter. Fun stuff. I highly recommend it.

High points
The sheer variety of bikes. There was everything from V-8 powered Boss Hoss monstrosities to fantastic little vintage bicycles with engines mounted on. The atmosphere was fun, as expected, although the carnival aspect didn’t seem quite so well developed as last year — there was no actual freak show tent, for example.

Low points
Definitely getting poured on out of nowhere. A 20% chance of rain shouldn’t mean torrential downpour.