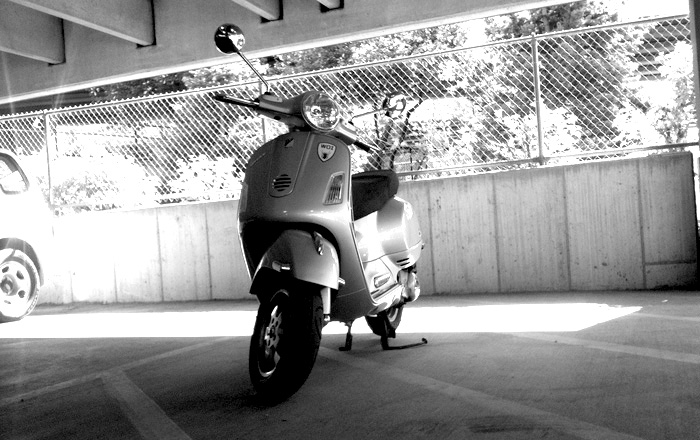 April 20, 2010 — It’s 7:30 a.m. My garage door groans its way open. Morning light spills into my little one-car garage. It’s about 40º out. It’s gonna be a cold ride this morning. Better get my balaclava. I walk around the back of my Vespa GT200L, my hand on the seat like I’m rounding a horse. I grab the handlebars and rock the Vespa off its center stand. Walking it backwards out of its suburban hangar, the machine all but whispers to me, “You know what? My grandfather was a fighter plane.” Key in — one click clockwise. Kill switch to On. Contact. All 21 horsepower fire to life. I rap the throttle a couple times to clear the idle jet and the Vespa grumbles happily in the crisp morning air.

Time for preflight. I cycle the turn signals, looking front and back, left and right as the piezo buzzer shrieks, “MEEP! MEEP! MEEP!” Check. High beam. Check. I squeeze both brake handles watching the tail light for bright red. Check. Fuel? Check — half a tank — that should get me through the week. I squeeze the rear tire. Check. Front tire. Check. No catastrophic leaks. A short, sharp blip on the horn and we’re ready to fly.

Back in the garage, I take my armored leather jacket off its hanger. It fits snug, but it’s comfortable. I pull my balaclava over my head and tuck it into my jacket collar. Helmet on. Visor up. Chin strap buckled. My leather gauntlets go on my hands — padding doubled over every key joint and slide point. There’s no insulation in these gloves, but I have a trick for that. Time to go.

I hit the garage door button and duck under the door as it descends. The Vespa burbles contentedly as I step through and put arse to seat. Walking the machine backward, I test first the front then the rear brake. The bite feels good. A quick look over my shoulder and I’m off.

Two stop signs. Two stop lights. I’m on Eagan’s main drag now, Yankee Doodle Rd., headed west. The speed limit is 45 mph. I’m probably doing about 50, checking over my right shoulder, once, twice, three times a lane change. The first block zips by and I’m watching the traffic lined up from Hwy 35E. Don’t pull out. Stay put, you bastard. I astral project my thoughts into that first car. He’s waiting for an opportunity to turn right and onto my street. I toggle my high beam just in case. Notice me, asshole. The last thing I need is this guy pulling out in front of me.

I’ll play some version of this game all the way to the office. It’s me vs. the hoard — a lone scooter in a sea of inattentive souls, each wrapped in at least two tons of steel, glass and distraction. I know the choke points by heart. The very next intersection is one of them: the right turn at Pilot Knob Rd. Check. The right turn has a yield lane. As I get there, the light has just changed and traffic is lurching from the starting gate of the far side of the street. Do I stop, or do I thread myself in after the last of the left turn traffic? I go for it. A white truck has an early lead over the rest of the northbound pack. Don’t worry, Mr. Pickup Truck, I won’t be in your way. I counter-steer into a deep lean and accelerate from 15 to 50 in about six heartbeats. I check my mirror and Mr. Pickup Truck is nearly a quarter mile behind me. Man, I love doing that.

Red light. Smooth stop. Feet down. I lean forward and cover my headlight with my hands like I’m trying to hide it. The black leather gloves soak up the heat from the high beam. This will keep my hands warm for a good 15 minutes. Green light. Back on the throttle. Feet up. My gloves feel almost scalding hot against the grips. That’s better.

I join Hwy 13 just as it intersects Hwy 55. This is my ticket across the river. This is my minor artery into Minneapolis. The two turn lanes on Hwy 13 quickly fill up. We’re going to turn left, then within about half a mile, our two lanes become one. Red light. I’m in the left lane — the lane to be — this way I don’t have to merge. I look around, waiting for the light to turn. This driver’s look says. “Seriously? You’re getting on the highway?” Yeah, and you don’t know it yet, but I’m going to get there before you do.

Green arrows. I draft the car in front of me all the way up to 55 mph. The two lanes merge and skepticism ends up three or four cars behind me. Now a sweeping left turn over the hill reveals the airport across the river in the distance. A commercial jet thunders overhead on approach from God knows where. They land them two at a time at MSP. Cresting the hill I hold my draft. I’m about a car length and a half behind the car in front of me. From the right, another onramp joins ours to form the two lanes of the Mendota Bridge. Head check right. Clear. I tuck down and slingshot around my blocker into the right lane. The flat half mile of Mendota is my Bonneville. How fast will we go? I bury the throttle in the sweeping downhill approach. 65. 70. 75. 73 holds on the flat. The Vespa is solid as a rock. No shimmy. No drama. Over my right shoulder, at 3:00, is the St. Paul skyline. At 1:00 is Minneapolis — both skylines equally dominating and equally distant. The Minnesota river sweeps under me in a marshy blur and historic Fort Snelling looms on my right — the great fortress that it is — like Alcatraz in an impenetrable sea of bright green trees.

Slow down. I sit up and uncoil the throttle a bit. The wind fills my chest but is outdone by my leather jacket. It’s time for the awkward Bloomington Rd. pseudo exit. Keeping a watchful eye over my left shoulder for any cars trying to dive into the exit at the last second, I tuck the Vespa into the shallow off-camber bank of the offramp. Hold the lane. Don’t merge yet. This lane is about to disappear, but if I change lanes too soon, I’ll end up in that gigantic pothole on the seam — the scooter equivalent to Charlie Brown’s kite-eating tree. Head check left. Clear. I make the quick lane change just in time to then exit this road all together onto Hiawatha Ave. The light rail rumbles and lumbers overhead on its way to Fort Snelling station. Not taking the train today. It’ll be way too nice this afternoon not to ride.

I turn right onto Minnehaha Parkway, past the dog park and past the narrow bridge to the VA complex. It’s time to meander. The parkway speed limit is 25 mph, but there are only a couple of stop signs and basically no merging traffic. Almost no traffic at all really. It’s a scooter’s home turf. It’s also both the easiest and the fastest way to the studio.

Time for the turning circle. We Americans are so bad at these things. I’m able to thread easily between cars. Thankfully it’s just a right turn for me on this leg of my commute. Nobody has to yield, or fail to. Now I just follow the river. The mighty Mississippi snakes its way along my right, maybe 100 ft below the roadbed. I’ll travel upstream all the way to the office. Holding a steady 30 mph, I weave along with the parkway. Overhead is a canopy of green, just sprouted with early spring. My commute rules.

Also to my right, a bike and pedestrian lane the width of a regular road lane follows the parkway. Runners. Joggers. People walking their dog. The occasional weird recumbent bicycle.

Oh not another one of these jackasses! A road cyclist skims the right edge of the northbound lane. For some reason completely lost on me, these guys (and they are always guys) insist on riding their bicycles in traffic even when there is a huge, dedicated, parallel bike path literally three feet to their right. Instead of using the path, they clog up the shoulder-less, narrow little two lane parkway. And you wonder why cars don’t respect you.

Of what few cars travel along in front of me on the parkway, most peel off at 32nd St. The rest at either Lake St. or Franklin Ave. By the time I crest the hill and the University of Minnesota comes into view across the river, I’m completely alone. The parkway descends and I’m now right next to the river, nearly level with it. The U of M towers above the opposite shore — a sprawling complex like Minas Tirith in LOTR. At the far end of the Washington Ave. bridge, I can’t not notice the Weisman Art Gallery. My first scooter, a 1979 Vespa P200E, originally belonged to Mr. Weisman, so I can’t help notice the structure each time I pass it. It’s also rather hard to miss on its own — a bizarre, twisted structure from the mind of Frank Gehry.

Most of the parkway is “rough as a cob” as my dad would say. I dodge potholes and try to keep my Vespa’s suspension from having to work harder than it needs to. Damn, I love these tires. They’re only a few hundred miles old, but the grip is just amazing. I round the next corner and it’s suddenly glass smooth. New tarmac. To my right is a fenced off former public parking lot. Instead of cars, hundreds of tons of twisted, mangled steel litters the lot as though it fell from the sky. This wreckage is the remnants of the Hwy 35W bridge that so famously collapsed in 2007. Its peeling green paint and rust encrusted edges make these scraps look like the lifeless entrails of some gigantic, destroyed robot. One more corner and there spans the replacement bridge — all white and shapely. The memorial sculptures still look like stink lines, if you ask me.

The Guthrie Theater’s bright blue box of a building announces that my Vespa and I are now in the Mill District. The parkway detours just before the theater, unfortunately. Time for my favorite stop sign maneuver. As I make the series of maze turns it takes to get from the parkway to my office, most involve stop signs. I pull up, grabbing the brakes hard at the last second. As the momentum of the bike stores energy in the front suspension, the Vespa comes to a complete stop for just a split second. In sort of Wile E. Coyote fashion, before the bike remembers gravity and tips over, I release the brakes. The momentum stored in the front suspension is released as just enough roll to keep the bike upright as I get back on the throttle. If I do it just right, I don’t have to put my feet down at the stop sign.

I top my final hill on 5th Ave and approach the Designers Guild Building. I’m here. I duck around the drop arm at the parking garage and my commute is complete. Kill switch to Off. Key one click counter-clockwise. I step down hard on the center stand and the Vespa comes to rest once more. I unclip my chin strap and slide my helmet off. That wasn’t so cold after all. My gloves come off reluctantly and I stuff them inside my helmet. Locking the steering column, I slip the key into my pocket. Another ride accomplished. Another street fight won. Another great day ahead. See you after work, Good Lookin’.