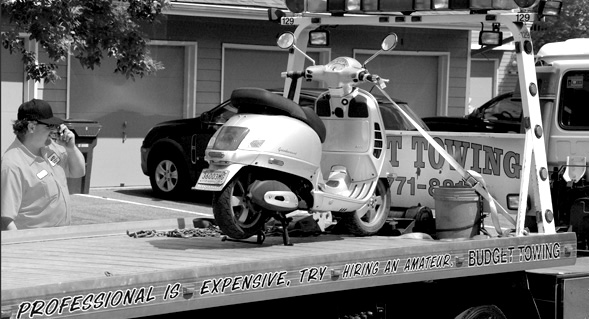 August 23, 2009 — So this morning I had only one thing on my agenda: attend the Wheels of Italy car and bike show over at Lake Calhoun. This seemed a simple enough photo mission and I was already imagining the kinds of groovy Ferrari and Lambo photos I would be posting to Flickr before the day was done. I sent a text message to my buddy Bree to see if he wanted to attend and then set about having a simple breakfast, putting on simple clothes, and getting ready for my simple day. Feel that sense of impending doom? I sure didn’t.

I gear up and hop on the Vespa for what was going to be a leisurely ride over the Mendota bridge then up Minnehaha Parkway over to Lake Calhoun. Everything was going just swimmingly. I’m passing cars and zipping up Hiawatha Avenue ready to turn on E. 54th Street to connect with Minnehaha Parkway. As I squeezed the brakes for the intersection, I noticed right away that something wasn’t right. My stopping power was greatly diminished. Stopped at the light, I squeezed the brakes independently and sure enough, it was like I had no rear brake at all. That’s no good. I pull completely off the road behind a row of cars parked for access to the fantastic Minnehaha dog park. No sooner had I set the center stand when I saw my problem: my engine oil dipstick was gone. Poof! Vanished! There was hot oil absolutely everywhere, including my boot. That explained the rear brake weakness. It must have wiggled its way loose over time and finally dropped off somewhere along the way.

I shut the engine off straight away and thanked the Maker that I hadn’t seized the motor from lack of oil. If the Vespa weren’t liquid cooled, I very well probably would have. I looked to where I’d come from and saw a distinct and messy trail of oil in a long line and several puddles that ultimately culminated in a hot, stinky pool of brown underneath my engine. I couldn’t believe how much oil I’d left on the ground. There isn’t much crankcase oil in a scooter to begin with — about a quart — there just couldn’t have been much left. So much for Wheels of Italy. Now I’m stuck sitting in the noon day sun waiting for a tow. On Twitter: 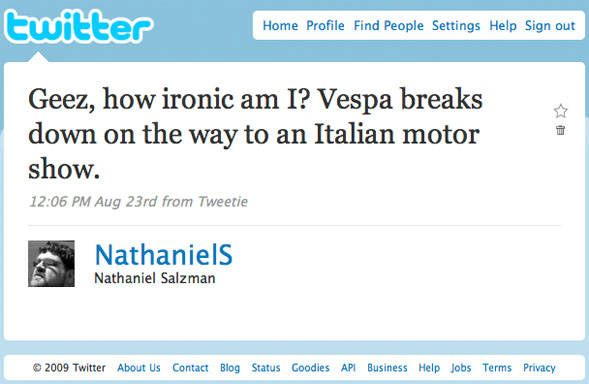 I called The Mrs, TM’d Bree, then gave a call to Vespa Roadside Assistance. Because it’s Sunday, Scooterville (and every other bike shop for that matter) was closed and wouldn’t be open again until Tuesday. There was Leo’s South in Lakeville, but that’s a bit of a trek on a tow truck. I called Leo’s and they didn’t have a dipstick plug anyway, so that was no good. My preference would have been to drop the bike off at Scooterville, but with nobody there I didn’t want to just leave it in the parking lot where somebody would vandalize or steal it. It didn’t hit me until an hour later, as the tow truck arrived, that all that was really wrong was a missing screw-in part. I can fix that. Let’s just go home.

After an hour of waiting and walking back up the road looking for my missing plug, the tow truck arrived. Bob, my new tow guy, and I, got the Vespa strapped down and headed the 10 miles back to my garage. Good thing too. Had we taken it all the way to Lakeville I would have been beyond the 12 mile radius where Vespa is fitting the full bill. So in this case, just going home saved me about $50. Now I just need to procure a new plug, change the oil twice for good measure, and remember to always give that little bastard a tightening turn before I go anywhere from now on.