Before I ever put a wrench on bolts, the #SalzmotoBonny was a design concept on digital paper.

This project, and by extension this whole website, began from a simple thing: I didn’t like the exhaust on my 2013 Triumph Bonneville. The bike suffered from an intense lack of character. Not only was the Bonneville too quiet, the engine was too smooth. I wanted to ride a motorcycle, not a sewing machine. The engine needed some bother. At just shy of 900cc, the Bonneville was quick, but I wanted the engine to feel like it was actually doing some work when I twisted the throttle, rather than simply blowing raspberries at me and turning gasoline into speed.

Of all the modern bikes out there, the Triumph Bonneville actually has some of the best factory and aftermarket support available in terms of both performance parts and aesthetic options. It’s a bike the custom community has embraced whole-heartedly, especially amateur builders like me. However, my plans for our Bonneville were small in scope. With the GL1100 still on my lift, the last thing I was looking for was another hard-core custom motorcycle project.

All I wanted from the Bonneville in the short term was more engine character and some noise to go along with it. In the long term, I figured I’d put some flatter handlebars, more attractive grips and better mirrors on it; but that’d be about it. Little did I know, my choice in exhaust was the first point in a chain reaction that would not only kick off a much larger custom build, but the whole idea of Salzmoto.

I knew I wanted something louder and more growling, but what I didn’t want was some straight-pipe nonsense where the Bonneville’s exhaust would become obnoxious. I wanted something with refinement. In thinking back to my Triumph Thruxton test ride in 2010, I’d enjoyed the Arrow exhaust they’d fitted to that test bike. It had an addicting “BRAAAAP!” to it without being distasteful. Since Arrow is the factory performance brand for Triumph, it seemed like a good choice. Yet as I looked at options for my mag-wheel Bonneville, the two-into-two Arrow systems designed for my bike weren’t appealing. What they gained in noise and character, they lost in aesthetic appeal. The Arrow silencers looked like something half way between old british and modern sport bike. They just didn’t look good, so I went looking for other alternatives.

After exploring options like the Predator slip-ons from British Customs and the Shark racing high-pipe systems, I finally landed on something a bit bonkers. I came all the way back to Arrow, but instead of the Bonneville system, I had my eye on the side pipe system for the Triumph Scrambler.

I have a confession, however. I don’t really like the Scrambler. I don’t particularly like scrambler bikes on the whole, Triumph or otherwise. Back in the day, scramblers existed because there weren’t really dedicated off-road bikes to be had. Today, most scramblers are just affectations in my opinion. They’re more style than actual off-road substance and compromising street performance for the sake of looking a certain way has never set well with me. After all, the original drive behind bikes like cafe racers was to improve their performance, not actually achieve a certain aesthetic.

I digress. When trying to figure out what to do with my own Bonneville, I kept coming back to this Arrow Scrambler pipe. If I’d wanted a Triumph Scrambler, which I didn’t, I would have bought one. Still, the appeal of the side Arrow couldn’t be denied. For me it was about the minimalism of it. Two-into-one, lightweight, and just a single cannon nozzle out the back. The pipe drew a single, bold line down the side of the bike on the standard Bonneville’s already low profile. It’s a decidedly modern pipe. It had none of this half-way, caught between vintage and contemporary compromise. What’s more, it simply didn’t belong on this bike and that made it even more interesting in my book. Putting this pipe on this bike also gave me what I thought was a satisfying way to subvert some of the current “scramble everything” wave in the custom scene. I’d push past the common concept of the scrambler all the way back to something more of a cafe motard bend. No knobby tire nonsense, just start with a gorgeous side pipe and go from there.

With that exhaust in mind, I created an entire design concept around the project. Pulling about a dozen different images into Photoshop, I began mixing and matching different components, using that Arrow side pipe as the focal point. I played around with seats, with bar heights, with grips, with blacking out certain components and with things like bobbed fenders. I moved turn signals around and experimented with different headlight profiles. Working with the motorcycle as a whole like this, I was able to be a lot more holistic. I’ve tinkered with my bikes in the past one detail at a time, but the results have always been mixed. A set of grips here, a new set of bars there, these mirrors, those turn signals, and so forth. The results weren’t awful, but they certainly weren’t at the level of visual appeal I admired so much in the work of others.

What I arrived on was this: 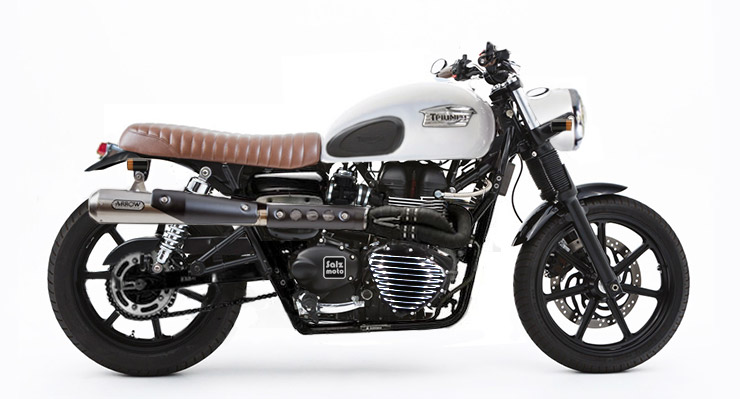 The design was driven by just a few guiding principles:

Because I’d composited my initial design in Photoshop using actual components, my parts list sort of created itself. I’d be sourcing my main components about 50:50 between Triumph and British Customs. There’d be a handful of Dime City Cycles components, and then a few more one-offs from vendors like Joker Machine, Speed Merchant and Benji’s Cafe Racer. Aside from blacking out certain components, there’d be no custom paint job. I liked the white a lot. Why mess with it?

With a vision in mind I ordered my first group of components, starting with that bonkers Arrow exhaust. Truthfully, I didn’t even know if it’d work properly on the Bonneville. The Scrambler engine has a 270º firing order, as compared to the Bonneville’s 360º timing. I was confident it would work out, however, since the cases, internals and bolt-up between the two engines are identical. I figured that at worst I’d have to improvise aspects of mounting the exhaust system, and we’d have to mess around with different ECU tunings in order to dial in that inappropriate exhaust. While still a gamble, it felt worth taking because having that pipe on that bike would make for something remarkable. It’d be a bike people wouldn’t quite be able to make sense of at first glance. Is it a cafe racer? Is it a scrambler? Nope, it’s the #SalzmotoBonny.