I am featured as the Guest Columnist in the July/August issue of Motorcycle magazine.

In the wake of Why “Built not Bought” is Bullshit‘s viral explosion back in March, I was approached by Motorcycle magazine to submit a version of that essay that could fit into their guest columnist feature. This meant taking a casually-written 1800+ word essay and condensing it down to less than 800 words. 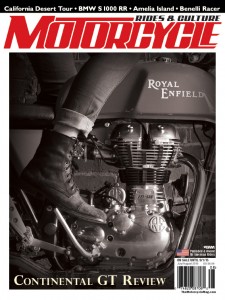 To call it an edit would be a considerable understatement. This was pretty much a ground-up rewrite and as most writers and editors will tell you, making something more succinct is the hardest work in writing. Making something longer is easy, making something about 60% shorter is painful, hard work. It’s rewarding though, and I’m really happy with how this turned out. So head to your local newsstand and pick up your copy of the July/August issue.

I’m happy to report that the published article itself appears untouched from my rewrite with the exception of the title, which was originally “The Trouble with Built Not Bought” and became “Creation Theory” in print. Not crazy about that new title, but a byline is a byline, right?

Side note: Those of you who had previously signed up for Salzmoto Premium membership actually got to see this piece before it was submitted to Motorcycle. If you’d like exclusive access to this and other content, sign up for yourself via one of the site modules, or here.