August 12, 2010 — Since 2007, I’ve measured the passage of each year with the coming and going of the riding season. From March to November the only reason to look at the weather is to see if it’s worth riding or not. For each riding season, the big event for me is always Rattle My Bones, the annual Twin Cities scooter rally. Each year 200-300 scooters converge on the Twin Cities for four days of two-wheel fun. This year was no different except for one big thing: I was way more involved behind the scenes.

For some insane reason, I volunteered to coordinate one of the rally’s signature events: the gymkhana. The original usage of the word comes from horses. It’s an agility course. In the case of the scooter rally, it means a scooter obstacle course. In past years, it’s meant fairly elaborate apparatus. Everything from jumps, to seesaws, to balance beams, to a literal (if unimpressive) ring of fire. In the past, the course has been run one rider at a time, him or her against the clock. This year I wanted to do something different. I wanted to make it a race.

Inspired by MINI’s autocross challenge of Porsche earlier this year, I designed a head-to-head parking lot double race course. Two riders would line up side by side then race around a pair of identical, mirror image courses. On each side, the rider has to make a choice to either go over the obstacle, or take a longer route around it before both racers tear back across the same line where they started. Beyond the head-to-head racing I wanted the course to be tight enough, and therefore slow enough, that it wouldn’t really matter how big your engine was. This wouldn’t be a race won on speed, but rather on rider skill in negotiating the turns. The proportions of the course were actually based on the MSF test course. The real beauty of this approach, in my thinking, was that there wouldn’t be times to keep track of, or penalties to exact. Simply get across the line ahead of the other rider! 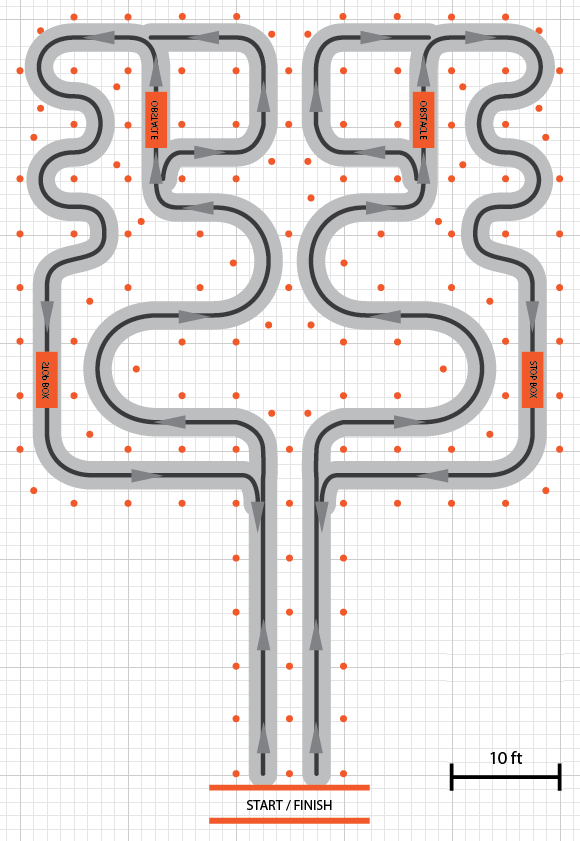 As fun as the course was to plan, I couldn’t do it alone. Thankfully, a great group of guys volunteered to help me set the whole thing up. In return, they invited me to participate in a part of the rally I’d never tried before: The Scavenger Hunt.

Thursday night, about 50 of us descended on Yarusso Bros. Italian Restaurant for a St. Paul scavenge. This is the one part of the rally I’d never participated in before. Frankly, I didn’t have much interest in it. I’m not from around here, so I figured I’d be useless short of holding the camera. That turned out to be mostly true, but I still had a super time. Our team, Team Smokin’ Pipes, buzzed around the capitol city taking photos and collecting dice. I got to know St. Paul a lot better and made some new scooter buddies. As fun as sleuthing the clues was, the real kick was riding around break-neck like a squadron of four spitfires. Good times indeed.

Friday morning came ’round and it was time to set up the course in the lot at Bluecat Motors. Our team of five spent the morning measuring, marking cone placement with sidewalk chalk. We had to do a lot of adjusting on the fly. We had to reset the intervals, we had to shift and shrink the course to accommodate some parked cars that weren’t going to clear the lot in time for the event. If that weren’t enough, just after our lunch break, it rained for about an hour, all but washing away our freshly chalked course. Thankfully though, we were able to re-mark it later in the day. It was an exhausting process and frankly, I’d never have got it done without everybody’s fantastic help.

Friday evening, as far as I’m concerned, is when the rally really gets going properly. Four separate group rides were scheduled to depart from Pizza Luce St. Paul and end down at Grumpy’s in downtown Minneapolis. Don and Scott, my right hand guys setting up the Gymkhana and fellow Smokin’ Pipes teammates, were leading the rookie ride. I did some escort riding for them on their fun little parkway route. But truth be told, by the time we got to Grumpy’s, I just wanted to get home. It’d been a long day.

Saturday is the big day for Rattle My Bones. It’s the big ride, the Gymkhana, the raffle and evening rock shows. I was tired. Really tired. As The Mrs and I rode out to the Square Peg Diner for breakfast, I actually cruised right through a red light on my Vespa. I just glazed right through it on autopilot. Thankfully, it’d only just changed and there wasn’t any cross traffic. Double thankfully, The Mrs. was more awake than I was and didn’t follow me through the light. I needed some coffee, stat! What also wasn’t helping was that this turned out to be the first day of my autumn allergies. When they get bad, my allergies make me drowsy, even without any medication. I was not in good shape for riding.

We arrived at Square Peg Diner and I was kind of a wreck. I all but main-lined the first cup of coffee I could find and if I’m honest, I wasn’t having much fun. A long day Thursday, plus a late night, plus an early morning Friday, plus my allergies made me want to just go right back home and sleep until winter. That wasn’t an option, however. We had a mammoth ride to pull off. Unlike last year, I hadn’t been on a single check ride for this Saturday route. That, plus my traffic light experience just an hour earlier, left me feeling less than confident about undertaking the rather dangerous activity of escort riding. Having blocked these previous two rallies, I wanted a break. I had secretly hoped that by setting up and officiating the Gymkhana, I’d be exempt from blocking duties. No such luck. I bowed to the gentle pressure of expectation from my scooter pals and donned my orange vest and flags. I took my place about half way back in the pack, ready to be what’s known as a relief blocker.

The ride went well. It was a gray, muggy morning, but it wasn’t too hot. I found a riding rhythm and spent the first half of the big ride relieving main escorts so that they could shoot back up to the front of the pack. At about the 90 minute mark, the ride took an intermission at The Chatterbox Cafe. I had about two hours before the ride would arrive at its final destination and I took the break as my opportunity to exit. I zipped home, took a cocktail of allergy meds to clear my head, and headed for Bluecat Motors in my MINI to put cones on the Gymkhana course. This was the result:

I swept the last bits of moveable grit off the course as the big ride arrived. It had gotten genuinely hot by now. Grabbing the bull horn from Kent, I recruited volunteers to help me fetch the obstacle apparatuses — a seesaw and a small ramp. My baby was finally complete. The Mrs helped me create the competition brackets on poster board and we duct taped them to the nearby dumpsters. People started signing up straight away. My one fear about this whole exercise was that hours upon hours of work would go into it only to have five people ride the course. That’s what happened two years ago. In no time, though, we had to expand the single bracket into a double bracket. The final number of participants for my race course ended up being more than two dozen! Even more signed up for the slow race. Everybody hit the taco line, grabbed a soda, and soon it was time to compete!

Competition was pretty fierce. Because we had so many participants and plenty of time, we did a “losers” bracket so that everybody got to run the course at least twice. The more you won, the more you got to run the course. I ringmastered the event, bull horn slung over my shoulder, from the start/finish line as volunteers kept track of the brackets. We only had one incident in what had to be almost fifty races. Competitor Tony low-sided his Bajaj in the middle of the course. He stayed on his feet, basically gently dropping the bike as he slid out in one of the course’s many tight turns. Damage to the bike was minimal — just scratches thankfully. The checkered flag finally went to fellow blocker and last year’s Gymkhana general, Pooter Fitzgerald. He road that tight little course masterfully on his Fireball Stella — usually one foot down, dirt track style.

The second half of the Gymkhana is the slow race. The main straights of the road course became the two lanes for the competitors. We followed the same bracket arrangement as the road course, but with time dragging on we made it into a single elimination event. The way a slow race works is that two riders, each in their own lane, set off from a starting line at the same time. Both riders pick up their feet and aren’t allowed to touch the ground or exit their lane without disqualification. Unlike a conventional race, the winner of the slow race is the last rider across the line. It’s actually quite a test of rider skill. How good is your balance? The winning rider rode a scooter that was all but built for the event. His modified Honda Ruckus had a CVT gearbox (so no clutch to contend with) and his tires were so wide and so squishy that he could have all but taken a nap on top of that scooter at a dead stop. It was an unfair fight to be sure and after a couple of his early runs, I think we all knew who the winner was going to be.

The Gymkhana wrapped, and I was intensely relieved. I’d been standing in the August sun for about five hours and I was spent. I was proud of my little event though. I got lots of great feedback and appreciation from people and I was thrilled that so many people participated. That’s what made it a success in my mind. With another quick swarm of volunteers, the obstacles went back into Bluecat’s warehouse and the cones were stacked and stowed. As the raffle got rolling by the taco stand, The Mrs and I tossed the last of our gear into the MINI and headed home to down a gallon of water and take a nap.

In retrospect, I have a brand new appreciation for all the work that Kent, Dave, John and the rest of the coordinators put into making an event like this happen. I only had the one little slice of it and it wiped me out. Sadly, I wasn’t alone in that feeling. About a week later John and Kent abdicated the thrown of RMB. After three years of making such a massive event happen, I can’t say that I blame them. Will someone else take up the mantle? Only time will tell. I absolutely don’t have time, but it would be a real shame if the 2011 riding season came and went without what is, for me at least, its brightest perennial event.