Honda's Elite scooter sparked my love for riding as a young boy. Now it's time to have an Elite of my own.

I’ve been hinting at it and talking around it for months, but now that my Honda CB750 project bike has sold, it’s time for a new machine. That new machine, funny enough, will be a scooter. Scooters were what first got me into riding, and with the exception of last season, I’ve always had a scooter in the fleet. Riding motorcycles in the Twin Cities pulled me away from my Vespa GT200L last year, but it was always the plan to return to scooters eventually. Moving to Chicago has accelerated that. Sure, there are plenty of great places outside of the city to ride a motorcycle, but if you want to ride around town, a scooter is the

It’s no wonder that Genuine Scooter Company is based here in Chicago. This is the first place I’ve ever lived that was truly urban enough where a scooter made significantly more sense to ride than a motorcycle. Especially a scooter with a CVT transmission. There are more traffic lights and stop signs in the greater Chicago area than I have ever seen in my entire life. Speed limits are lower too. Roads that would have 50 mph speed limits in the TC are 35 mph around Chicago. For the first time, I can finally understand the appeal of a 50cc scooter or moped. Add to that the often nation-leading high price of gasoline in this city and a scooter starts making all sorts of practical sense. It’s going to be the most economical fun I can have in Chicago, hands down.

So the scooter itch is one I’ve just got to scratch, but I’m also taking this as an opportunity to procure a specific scooter that I want as a part of my fleet: a mid-80s Honda Elite. Specifically, I’m going to buy an Elite 250. You see, I have to. I have to own a Honda Elite because it’s part of my two-wheel origin story. Owning an Elite will help me reach back in time and close a circle that was opened when I was but a wee little lad. When I was a kid, the highlight of every summer was visiting Camp Yorktown Bay during their annual family week. Parents could bring their young kids (kids too young to attend summer camp on their own), rent a whole cabin to themselves and then utilize the camp’s resort-like facilities. It was then, and remains today, a non-profit facility, so people are often donating vehicles and other equipment for the tax deductions. I remember very vividly that one summer, as a lad of five or six years, we went to CYB for our annual week away. Stowed in the barn-like gymnasium were two Honda Elite 80 scooters that had been donated to the camp. One was red, and one was black.

Here 25 years later I can still remember them vividly. They’d been sitting for months. There was a thin layer of dirt and cobwebs on them. A shame, in retrospect. To my five year-old eyes though, they were spaceships. I understood that they were actually scooters — a thing that sat in my brain as some sort of a big bicycle — but in my imagination they were out of The Jetsons and could fly. I actually assumed that these angular little Hondas were electric — just like all the golf carts I was seeing around camp. An Elite 80 just looks electric, even to this day. As I stared at them wide eyed and reverent, the thought in my little head was “One of these could take me anywhere.” I was both excited that they existed and sad because I knew I didn’t know how to make them work. I also knew my dad would not approve of me riding one. Even that young I’d heard the term “murdercycle” used by both of my parents.

It didn’t stick though. In the movie of my life, stumbling across those Honda Elite scooters is my inciting incident. It’s my formative moment that would echo through my adulthood. It’s Arthur extracting the sword. It’s Bruce Wayne losing his parents. It’s the Kents finding the young Superman. It’s Tony Stark’s terrorist kidnapping. It’s R2 finding Luke. Those neglected Elites, which may have never run again, were seeds planted deep in my brain. Seeds that sprouted 20 years later when I purchased my 1979 Vespa P200E, and later bloomed into a jungle of motorbike obsession. 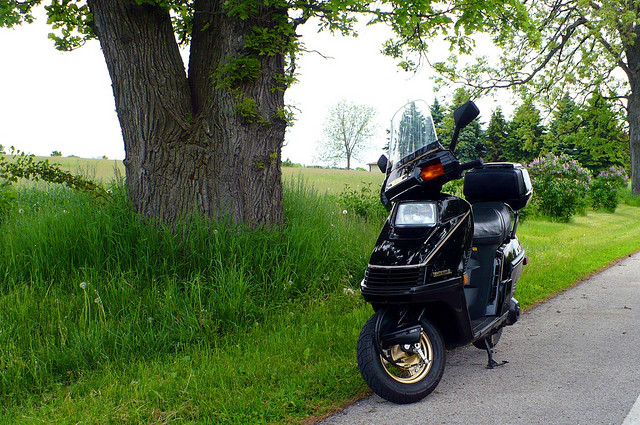 So you see, I am required to own a Honda Elite. In fact, I can’t believe it’s taken me this long to go down this road. I will, however, be making one compromise for now. Rather than buying an Elite 80, which was the exact bike I saw so many years ago, I’m going to procure an Elite 250. In the 25 or so years since I saw those first scooters, I’ve grown both up and out, so an Elite 80 isn’t going to be quite enough machine for me. The Elite 250 will be perfect though. It will still look like a space ship, and it actually will be able to take me anywhere.