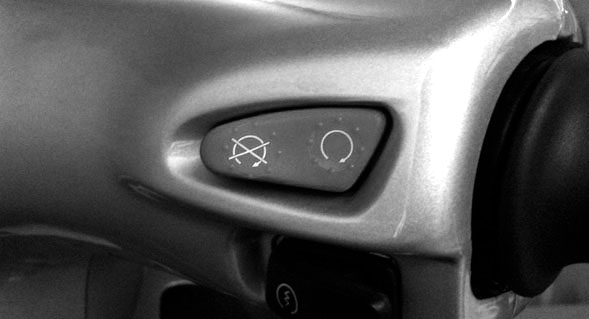 August 4, 2009 — Tonight a Jeep Cherokee pulled an oblivious left turn right in front of me. Thankfully I was still far enough away that he only managed to pull out in front of me. Had I been a few yards further along, he might have hit me instead. It was still close though. This is how something like 60% of fatal two-wheel accidents occur. I grabbed both brakes hard and felt the rear lock up on me and the bike twitch hard. I let up just enough to stabilize the bike but kept on it. Had the Jeep not pulled through the turn as fast as he had, I’m pretty sure I still would have gotten the bike fully stopped before crossing his actual path. Barely, but just. I wasn’t able to even lay on the horn until we’d crossed paths, so I’m not sure if he ever realized what he’d done. The setting sun was behind me, so I’m sure he couldn’t see me. It wasn’t malicious, and probably not even inattentive — something I could have easily done in his driving shoes.

This is only my second truly close call with another vehicle, but this one was much, much closer than the previous incident. Usually close calls and oblivious, cell phone absorbed drivers just piss me off. This time I didn’t have that same gut reaction — that visceral rage. Mostly I just felt relief. I’d done what I was supposed to do in that situation. I grabbed as much brake as I safely could and held my line. I didn’t try to brake and swerve at the same time — a common newbie rider mistake that will dump your bike every time.

My only irritation is that I let my attention wonder for just a brief second before it happened. I’d passed several emergency vehicles in the previous few minutes and just before this situation unfolded a fire truck had emerged sirens and lights ablaze from a side street on my left, headed in the opposite direction. I changed lanes from the left lane to the right lane just to be sure I was out of the way. I looked back over my shoulder, then forward just in time to see the Jeep turning in front of me. Had I been paying proper attention, I would have anticipated his turn and probably would have been completely stopped by the time he swung out in front of me. A valuable lesson to learn. Eyes front, soldier. I said a short prayer of thanks, slowed down a bit, and made my way home without further incident. This certainly hasn’t turned me off to riding, simply emphasized how important it is to take riding seriously. It’s all part of artfully dangerous living.

High points
An otherwise very enjoyable ride home in fabulous weather. I’ve also finally found a smooth and expedient route home. Also seeing that my instincts have been well trained. I did the right thing for the situation. There’s comfort in that. I stayed calm. I didn’t panic. I kept it shiny side up and lived to ride another day.