Ride Log: The Mrs, the Lake and Sheridan Road

Two old Hondas take us up the most scenic road in Chicago, and my desire to add a scooter back to our fleet is stronger than ever.

March 10, 2012 — Winter this year was eerily mild all across the Midwest. We moved from the Twin Cities to Chicago just after Christmas on dry roads and without a single flake of snow. Spring approached early, with rain-washed streets and mild temperatures greeting us in early March. This particularly sunny Saturday morning had me out in the garage tossing a new fuel pump on the GL. The proving run afterward had been so much fun, I stopped back inside and asked The Mrs if she wanted me to summer-ize her CM400 so that we could go for a real ride that afternoon. “Sure!”

I reinstalled her battery, added several quarts of fresh oil and stuck my key in the ignition. As expected, the CM fired up straight away — its familiar, happy buzz filling the garage. I checked the chain tension and inspected all the lights while the motor warmed up a bit. Everything was as it should be. I hopped on for a quick jaunt down to the corner gas station to put air in the tires. The little Honda was just as peppy and fun as ever, and as Evanston echoed with the raspy buzz of 27 angry tablespoons, it became that much more our new home. Hello, neighborhood, there are motorcycles afoot. Hope you don’t mind the noise.

Returning to my garage shop, I decided to go ahead and summer-ize the CB750. Why not ride all three bikes in one day? I already had the tools out and that bike already had oil in it. Piece of cake. Just like the CM400, the CB750 fired up straight away. Unfortunately, it also immediately started leaking gasoline from the fuel passages. My father-in-law had warned me about this on his own inline fours. He leaves the carbs wet over the winter with stabilized gas in the tank. I’d drained these, and that had allowed the old o-rings to dry out. Lesson learned. Next time I winterize any motorcycle, I’m going to start with stabilized fuel and actually flush fuel through the carbs over the course of the winter. But for now, I shut off the engine and closed the petcock. The 750 would have to wait for another day.

With her bike already warmed up, I pulled the CM400 ’round front and returned for the GL1100. Its new fuel pump was churning away nicely, so it started right up. I pulled around in front of our house and the two bikes sat next to each other, shining in the afternoon sun. We donned our riding gear and headed out into traffic together for the first time since late September of last year. Being new to the Chicago area, I wasn’t even really sure where to go. I knew of basically two roads worth traveling in our area — Lakeshore Drive and Sheridan Road. I wasn’t in the mood to fight the traffic down to LSD, so we opted to head north on Sheridan towards Wisconsin.

What a gorgeous little road! Its rich with architecture, scenery and even occasional views of Lake Michigan. It even has some genuinely twisty parts. As we ventured up toward Wisconsin, Sheridan turned out to be a great choice for our first ride out because of its low speed limits and sparse traffic. The road surface is really rough in places, but on motorcycles, it’s not really a big deal. After spotting a pair of Ferrari F50s coming the other way, we turned off into a lake-side park we’d discovered earlier. The bikes, the sunset, the lake — it doesn’t get much better. Returning from the beach, we trundled home into the setting sun. Sheridan had been great, but given its speed limit, I think it’s going to make a better scooter destination than motorcycle route. That’s the real challenge at this point — figuring out where to ride. The Twin Cities are great for motorcycles basically wherever you go, but Chicago is a very different city. As much as we enjoy or motorcycles, that first real ride of the season had both of us thinking about scooters. With so many great roads up north of town for riding motorcycles, it’s definitely not an either/or proposition. But next time I cruise a long way on Sheridan, I want to do it on a scooter. More on that to come. 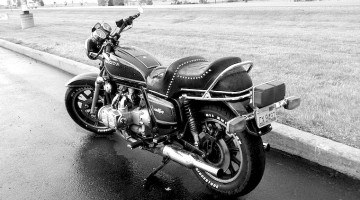